City Girl, country life
(or how I ended up raising chickens) 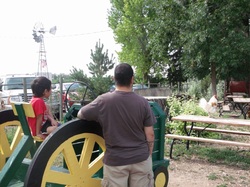 First off, I am not completely country (nor do I think I ever will be). I still hate most country music (I prefer Fall Out Boy over Keith Urban any day) and I don't even own cowboy boots (but, they are in fashion now, so that may change). But, a few years ago, my hubs and I traded our urban city lives for the peace and quiet of a small town country living. And it is awesome.

It all started with dinner. We went to go have dinner with some friends who lived in this small, rather unheard of town about 45 minutes from where we were at the time. The hubs and I thought that we were slightly crazy for driving all that way for dinner (especially with a 3 year old), but we did it anyway.

When we arrived, as we got out of the car, the first thing that we smelled was COW (for those of you who live near farms, you know what I'm talking about). It stank! Our noses were used to the stench of ozone and exhaust, not to manure and farm.

On the way home, we discussed dinner, but also complained about how we were all the way in the middle of nowhere. There were no bookstores, only one movie theatre, and I couldn't walk to Target. Our city minds couldn't really comprehend how anybody could live out in the middle of nowhere. Plus, at the time, I was teaching in a middle school up the road and the Hubs was working in a nearby tech center. Who would want the commute?

The strange thing was, we kept going back. We would visit our friends often (they lived in a house and we were in a small townhome), and they would take us to these small town events. We were visiting at a time when the town was having their annual Christmas parade down Main. Local high schools (there are only 2), 4H clubs, Boy Scouts, and small community businesses marched down the street in their homemade floats as we sat on the sidewalk drinking hot cocoa. The sense of community was overwhelming and made my heart expand. My husband and I both looked at each other over the head of our small son as he oh'd and awe'd over the lights and we both knew. It was time to move.

We packed our bags and found a large house with a stunning cast iron wood burning stove and a huge backyard. Almost instantly ideas of gardening and backyard BBQs filled our heads. So, after settling in, we decided to go ahead and give gardening a try (after 13 years of marriage, this was our very first house, so having a backyard was a huge treat!). Both the Hubs and I had small gardens growing up and we both figured we could manage it. And we did. And it went really well. So well, in fact, that we had to start canning (another "country" concept that I was rather unfamiliar with).

Being from the city, I had no idea had to can. So, we researched it and tried it anyways. It went...OK. Minus some steam burns and unsealed lids, we actually ended up with several jars of jams (well...runny sugar berry goodness), jellies and veggies (the pickles turned out the best).

At first, settling in to the country was odd for me. It is SO quiet. There isn't the lull of cars driving past, or sirens, or buses, or just the living and breathing of city life. The country has a life of its own. Instead, in the country, you can literally hear the wind rustling through the trees, the neighbor's cat creeping along the fence tops, the train whistle as it passes through the middle of town or the wild fox crying in the middle of the night (we first thought it was a banshee). This disturbed me those first nights. I couldn't sleep because it was so quiet and my brain couldn't process not hearing the traffic or other noises. But, like everything else that we've been through together, we adapted.

Now, after nearly 4 years of living in the country, our lives have changed dramatically. We eat dinner at 5:30. No excuses. Our garden is now 24'x24' and pretty much sustains us through the winter (I've gotten much better at canning!). I have learned how to quilt (I know the shopowners by name) and am starting to look at patterns for making clothes. The Monk is a Wolf Cub Scout and The Hubs is his den leader. We spend a lot of time outside and only go to Target when we really need to (it's over 5 miles away from the house - one way). And I am now officially a stay-at-home mom with only one student. My son. We begin homeschooling in September.

Going country has been an amazing turn of events, something that I would never have imagined for myself or my family, but it has brought us closer together and made us a better family. I can't wait to see where we go from here.
Powered by